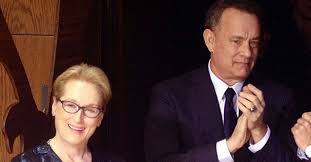 [:en]
Academy Award winners Tom Hanks and Meryl Streep come to the Rome Film Fest to meet the audience and pick up prices.
The eleventh edition of the Rome Film Fest will take place between October 13 and 23 this year at the Auditorium Parco della Musica, and at other locations in the Italian capital.

Tom Hanks, winner of two Academy Awards and protagonist of three decades of great cinema, will receive the Lifetime Achievement Award. On the occasion of the award ceremony, there will be an event with Antonio Monda, the artistic director of the Rome film festival. The American actor will receive the Lifetime Achievement Award, celebrated with an ample retrospective of his films

David Mamet, author of House of Games and Heist and top-screenwriter, will attend an onstage conversation, in his double role as film director and screenwriter. Don DeLillo, a key figure in post-modern American narrative, will talk about the relationship between cinema and literature, and about his passion for Italian master Michelangelo Antonioni. Daniel Libeskind, who designed the Jewish Museum in Berlin and the project to rebuild the World Trade Center in New York, will discuss the relationship between the seventh art and architecture, and about his love for Paolo Sorrentino’s films.

More information on the site of the Rome Film Fest.