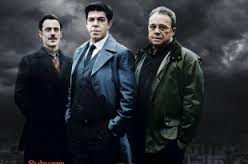 [:en]”A brash and brutal Italian crime thriller”, writes The Guardian about the 2015 Italian film “Suburra”, that was released in the United Kingdom late June. The same quality newspaper speaks also highly of the 2014 Italian crime drama “Gomorrah”, whose second season belatedly returned on the screen in May-June (Sky Atlantic). “It capped off its first run with an adrenaline-charged crescendo of plot shocks and gratuitous killing that made The Godfather look like Gilbert and Sullivan”.

“Suburra” (the name derives from a Roman neighborhood) and “Gomorrah” (refers to the biblical Gomorrah and the Neapolitan criminal organisation “Camorra”) are both directed by Stefano Sollima.

“Stefano Sollima’s brash and brutal movie is a melodrama of political corruption and gangster turf wars in Rome. This is straight-ahead mob action, a vision of crows pecking each other to death when they’re not feasting on the corpse of “Bunga Bunga” Italy. It’s carried off with a great deal of flair”, according The Guardian. The same daily on “Gomorrah”, based on the book by writer Roberto Saviano: “Saviano painted a world of ugly villains who murder both the guilty and the innocent by the truckload, while corrupting governments and businesses across Europe. His gangsters are not fun mavericks, but malevolent criminals driven by a psychopathic lust for power. Saviano dragged these thugs and hoodlums out of the soft-lit Hollywood sound stage and placed them squarely in the grimy, strip-lit slums of Naples.”

The two TV series of “Gomorrah” (a third series is in the making) was sold to 113 countries. There is also a great interest abroad in “Suburra”. Netflix subscribers in the U.S. and Latin America could already stream “Suburra” in October 2015, when the film was released in Italy.